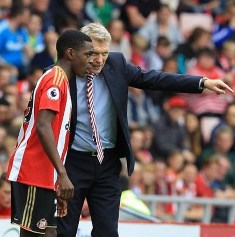 Arsenal and Newcastle United have joined the race for Sunderland’s Nigerian wonderkid Joel Asoro, according to reports.

Swedish newspaper Expressen has reported that scouts representing the Gunners and the Championship club were at Swedbank Stadion (Malmö) on Monday night when Sweden U21s took on Spain U21s in the European qualifiers.

Newcastle United’s chief scout Graham Carr and Arsenal’s Scandinavian representative Bobby Bennett were impressed by the performance of Asoro, who is eligible to represent Nigeria through his parents.

Paris Saint-Germain, AC Milan, Inter, Bayern Munich and Borussia Dortmund are also believed to be monitoring the progress of the young midfielder and sent their reps to watch him against the Spaniards.

Asoro became the youngest Nigerian to feature in the Premier League when he appeared in the 81st minute of the contest against Middlesbrough on August 21, 2016, at 17 years and 117 days.