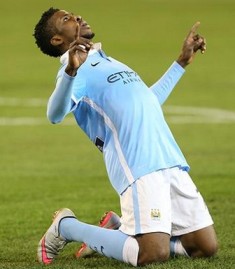 Kelechi Iheanacho has started his first-ever Manchester derby, with City manager Pep Guardiola naming the young star in the line-up to face Manchester United at Old Trafford on Saturday afternoon.

In the most important Premier League game of the season so far, Aguero has no choice but to watch from the stands after he was handed a three-match suspension by the FA, and the Nigerian has been pushed into the starting XI.

In a 4-2-3-1 formation, Kelechi Iheanacho will lead the frontline, while De Bruyne, Sterling and Nolito are the attacking midfielders.

England youth international Tosin Adarabioyo has not been included in the Manchester City squad.