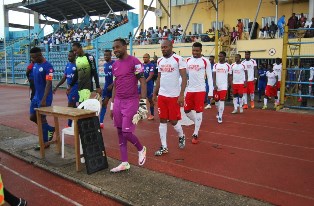 Rivers United captain, Festus Austin says players of the club must not get carried away as they look to win the Nigeria Professional Football League (NPFL) title at the first time of asking.

United is currently top of the NPFL standings with three matches remaining and the ‘Pride of Rivers’ know they are within striking distance of an improbable title.

Austin however concedes that it will be extremely premature to start singing the victory tunes with three potentially difficult fixtures still to navigate.

“Nobody (at Rivers United) should even start thinking of celebrating because it is too early for that kind of thing.

“If you take a closer look at the (NPFL) table, you will realize that there are four or even five clubs that are capable of winning the title.

“At this stage of the season, calm heads, disciplined individuals and consistent levels of hard work are required,” he told Rivers United Media.

United will embark on a banana skin trip to Bauchi to face Wikki Tourists on Sunday, a side that previously spent 63 days at the top of the table, in their next league game, knowing defeat could sound the death knell on their title aspirations.