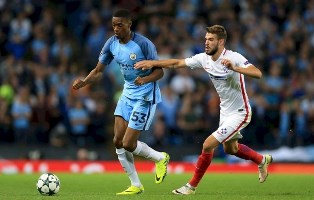 Tosin Adarabioyo put up an impressive performance as Manchester City began their campaign in the UEFA Youth League with a comprehensive 4-1 victory over Borussia Monchengladbach at the Academy Stadium on Tuesday afternoon.

The central defender had not started a competitive fixture at any level since the start of this season before making City’s starting XI to face the German opponents.

And the Nigerian teenager didn’t disappoint, earning himself a lot of kudos for making Borussia Monchengladbach striker Alperen Sahin look ordinary, and was officially named Man of the Match for his efforts.

Goals from Lukas Nmecha (2), Jadon Sancho and Hanraths (OG) secured the win for the Citizens while Yosef Milo pulled a goal back for the visitors.

England U18 international Ashinme Kigbu is eligible to feature in the UEFA Youth League for City but was not named in the squad by coach Simon Davies.