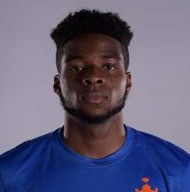 FC Cincinnati frontman Sean Okoli has been named to the United Soccer League Team of the Week on the heels of scoring three goals in two matches.

The 23-year-old bagged a brace against Saint Louis before netting in the 30th minute in the 2-0 victory over Wilmington Hammerheads on Sunday, to take his tally to 15 goals in the division.

Okoli, who is a product of Seattle Sounders, is the joint-top scorer in the USL alongside Jack McBean of LA Galaxy II.

The ex-Orange County Blues and New England Revolution player has been recognized in the Team of the Week five times in the 2016 campaign.