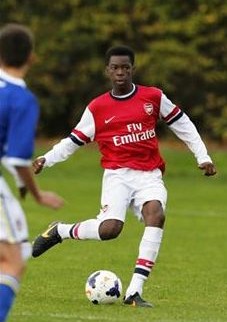 If you are fan of Liverpool and Nigerian football, Ovie Ejaria should not be a new name for you. Here are ten interesting facts about the midfielder.

1) Ejaria was born on November 18,1997 in London, England to Nigerian parents and is eligible to play for the two nations.

2) Progressed through the ranks before making his debut for Arsenal U18s and trained with the U21s.

3) He played alongside Nigerian duo Olufela Olomola (now at Southampton) and Aaron Eyoma at Arsenal schoolboys.

4) The midfielder spent nine years at Arsenal academy before his departure in 2014.

5) He was offered a contract by Liverpool after impressing the youth team coaches at the AEGON Future Cup two years ago.

6) When interviewed by allnigeriasoccer.com, Ejaria revealed that he was courted by Chelsea, Manchester United and Manchester City before joining the Reds.

7) He trained alongside Isaac Success (Watford) and Kelechi Iheanacho (Manchester City) during the Under 17 camping exercise in 2013.

8) Two years ago, he pledged his international future to Nigeria but has not been capped at any level.

9) He made his debut for Liverpool’s senior side in a pre-season friendly against Tranmere Rovers on July 8.

10) He was included in Liverpool’s 18-man squad for a competitive fixture for the first time in the 2-1 win at Chelsea on September 16.