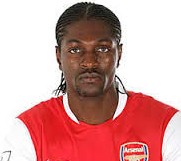 The proposed move of Togo international of Nigerian descent Emmanuel Adebayor to French club Lyon is off.

The Ligue 1 side expressed concerns that the lanky striker will not be available for selection during the upcoming African Cup of Nations and his ineligibility for the UEFA Champions League was also an issue.

“They said that? That’s nonsense. They came to me after we had qualified  so they knew I was going to play,”  Adebayor told L’Equipe.

“If they start looking for such excuses, they will kill themselves. I’m the captain of my country, so how could I not go? What if a Frenchman refused to play in the Euros?”

Adebayor added : “OL spoke to Claude Le Roy, my coach with Togo, and they didn’t ask for special treatment. This was absolutely never a reason there was no deal.

“I found out on Saturday morning. Claude Le Roy told me he had seen it in L’Equipe.

“I called my agent who more or less confirmed it to me. Terms were agreed on Tuesday. Lyon wanted to send me a private jet to Lome.”

Adebayor has been without a club since the end of last season following his release by Crystal Palace.  He previously represented Arsenal, Man City and Tottenham Hotspur.