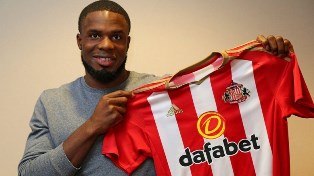 Catch up on the performances of players of Nigerian descent in the English top-flight on Sunday, September 18.

The biggest shock of the weekend was Watford’s 3-1 win over Manchester United at Vicarage Road. Super Eagles striker Odion Ighalo started and was in action for approximately 90 minutes.

The number 24 was replaced by ex-Granada man Isaac Success, who was involved in the build up to the penalty earned by the Hornets in injury time. Stefano Okaka sat out the fixture as a result of an injury he sustained on his debut last weekend.

Southampton’s teenage striker Olufela Olomola was not selected as the Saints grinded out a 1-0 win over Swansea City. The former Arsenal starlet was in the 18-man squad that faced Sunderland in the Premier League in March.

Over to White Hart Lane, Tottenham Hotspur managed a 1-0 win over Victor Anichebe’s Sunderland.  The Nigeria international and teammate Joel Asoro were not involved, the former due to injury.

England star Dele Alli put in a ninety-minute shift in midfield for Spurs, while England U20 midfielder Josh Onomah was not selected.