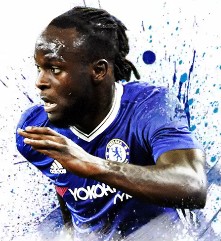 Allnigeriasoccer.com can confirm that Victor Moses will not attend the wedding of his elder sister, Eki, on Saturday, September 24 because of commitments with Chelsea.

Chelsea will face off against neighbors Arsenal in the Premier League this weekend at the Emirates, and the Nigeria winger has not been permitted by the Blues hierarchy to travel to Benin City.

In the same vein, Moses will also miss the traditional wedding scheduled to take place on Thursday in the family house in Benin.

The family house was inherited by Moses’s father but the Super Eagles star later demolished the house to build a more befitting structure - a duplex and two flats - when he joined Wigan Athletic from Crystal Palace.

Victor Moses’s elder brother, who doubles as his personal assistant , has already arrived in Benin City from the United Kingdom for the wedding.