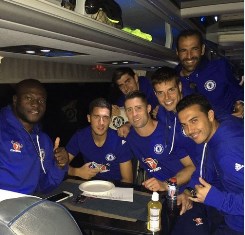 Victor Moses was over the moon after Chelsea’s comeback win against Leicester City in the third round of the League Cup on Tuesday night, and has praised the fans for their unwavering support at the King Power Stadium.

The Blues were staring elimination in the face after a brace from Shinji Okazaki had put the Foxes two goals up inside the opening 35 minutes, but the game was turned on its head when Gary Cahill netted just before the intermission.

In the second half, Azpilicueta took the tie into extra-time before a brace from Fabregas secured a 4-2 win for Antonio Conte’s side.

“Brilliant to come back and win tonight. Fans were fantastic thank you all for your support! #CFC, ” Moses said in a social media post.

The Chelsea number 15 has played seven games in all competitions so far this season, scoring 2 goals.