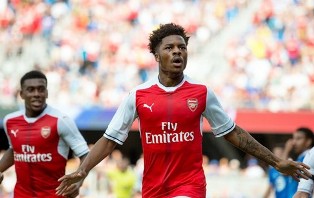 Arsenal boss Arsene Wenger was pleased by the performance of Chuba Akpom in his side’s emphatic 4-0 victory over Nottingham Forest in the League Cup on Tuesday night.

The England U21 international of Nigerian descent has seen his first team opportunities limited in the new season despite impressing during pre-season, with yesterday’s tie at City Ground his maiden appearance for the first team.

Asked to comment about the performance of Akpom and Reine-Adelaide, Wenger told arsenal.com : “You forget a little bit Ainsley Maitland-Niles, I think [that was] the first time he played right back [in the first team].

“All three have done extremely well and I would like to congratulate them because I am very happy with their performances today.”

Akpom scored four goals from five appearances during pre-season and has hit target three times for Arsenal U23s in Premier League 2 this term.