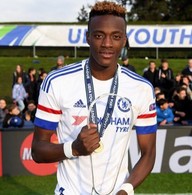 Bristol City coach Lee Johnson could not hide his admiration for Tammy Abraham following his game-winner against Fulham in the third round of the League Cup on Wednesday night.

The Chelsea loanee came off the bench in the 62nd minute, before scoring in the 90th minute when he poked home O’Dowda’s cross from close range with the game poised to go into extra-time .

“We moved the ball excellently and we had our trump card to bring on in Tammy Abraham, and he’s provided the winner again,” said Johnson in his post match comments.

“I thought it was a real team effort today and I was so proud of so many of the young ones.”

In 11 outings for Bristol City in the ongoing season, Abraham has found the back of the net nine times and has scored in every single round of the League Cup.