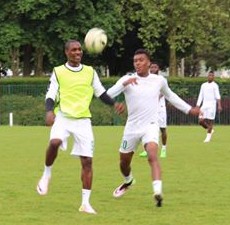 Nigeria international Alex Iwobi was applauded off the Emirates Stadium turf in the 69th minute as Arsenal beat Chelsea for the first time in the Premier League in five years.

Chilean Alexis Sanchez opened scoring in the 11th minute when he was handed an opportunity to showcase his skills after Cahill dallied on the ball, before Theo Walcott doubled the lead three minutes later.

It was a superb team move involving Iwobi, Héctor Bellerín and the England international, who found the back of the net with a simple tap-in.

The scoreboard read 3-0 in favour of the Gunners five minutes before the intermission thanks to Ozil who finished off a move he started when he hit a volley into the ground past goalkeeper Courtois.

Super Eagles winger Victor Moses watched proceedings from the bench while Obi Mikel and Ola Aina were not named in the Blues 18-man squad.