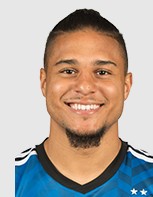 San Jose Earthquakes striker Quincy Amarikwa is facing a spell on the sidelines after sustaining an injury in his team’s 2-1 loss to Sporting Kansas City on Saturday night.

In his first start in over a month, the Nigerian was substituted as early as the fourth minute after landing awkwardly on his left leg following a collision with the goalkeeper.

“I know I tore something, It was a case of bad timing” Amarikwa told the San Jose Mercury News.

The 28-year-old will  undergo an MRI scan on Monday, the newspaper has reported.

California-born Amarikwa has 23 games under his belt in Major League Soccer so far this season, scoring 3 goals.