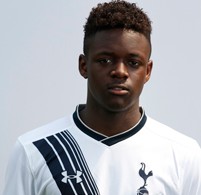 Tottenham Hotspur continue to struggle in this season’s UEFA Youth League following their second loss in the group stage to CSKA Moscow at Stadion Oktyabr on Tuesday afternoon.

England youth internationals Timothy Eyoma and Keanan Bennetts were handed starts, with the defender playing the whole game while the winger was hauled off in the 62nd minute.

The Muscovites overcame the Londoners 3-2 thanks to Kuchaev’s who scored the game-winner in the third minute of stoppage time after Griffiths had netted his second goal of the afternoon to bring the scoreline to 2-2.

Striker Aramide Oteh, who has impressed for Spurs in the U18 Premier League, watched proceedings from the bench.

Tottenham Hotspur are guests to Bayer Leverkusen in their next fixture on October 18.