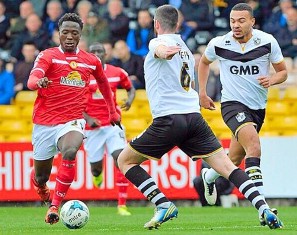 Crewe Alexandra suffered a 3-2 loss to Wolverhampton Wanderers in the Checkatrade Trophy on Tuesday night with two Nigerian-born strikers, Daniel Udoh and Bright Enobakhare, in action.

The visitors found themselves two goals up before the intermission courtesy of a brace from Dicko.

Crewe Alexandra restored parity in the 82nd minute before Enobakhare bagged the match winner with two minutes remaining, firing home from close range after the goalkeeper collided with his own defender.

Whilst Udoh was replaced in the 70th minute, Enobakhare lasted the distance at the at Alexandra Stadium.

Elsewhere, Fred Onyedinma netted for the second game in a row as Millwall defeated Gillingham 2-1.