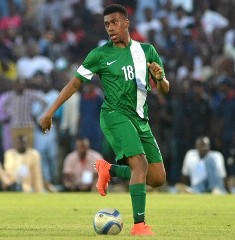 The Gunners have published the result of the voting via their official webpage, with the 20-year-old Nigerian clocking at number three after accumulating 18.4 per cent of the votes cast.

In September, the Hale End Academy racked up five appearances for Arsenal in all competitions, including three in the Premier League and won the Man of the Match award in their 3-0 rout of Chelsea.

Alexis won 39.4 percent of the votes while England star Theo Walcott was in second place with 23.2 percent.

Alex Iwobi is currently on international duty with the Nigeria squad and netted a brace in a friendly game against Plateau United on Wednesday evening.