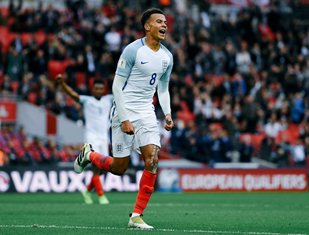 Tottenham Hotspur midfielder of Nigerian ancestry Dele Alli helped England maintain their unbeaten start to the European World Cup qualifiers after finding the back of the net in a routine 2-0 win over Malta on Saturday evening.

Alli and Nigerian-born striker Alfred Effiong both made the starting line-up for their respective nations, but it was the Spurs star that stole the show when he put the Young Lions 2-0 up in the 38th minute.

Five minutes before full time, the former MK Dons starlet almost made it 3-0 but but somehow managed to miss the target after Rashford directed a ball squarely in the box.

Whilst Balzan star Effiong departed the hallowed Wembley turf in the 76th minute in what appeared to be a tactical substitution, Dele played the full game.

England now sit in first place in Group F with six points in the kitty ahead of Scotland’s match with Lithuania on Saturday night.

Former Watford wing-back Ikechi Anya is on the bench for the Scots at Hampden Park.