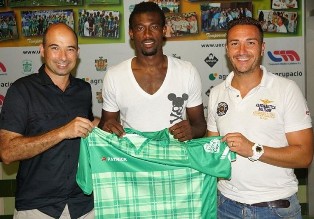 Kenechukwu Uchenwa was dismissed in UD Cornella’s 2-1 loss to Hércules CF in a Copa del Rey Third round clash at the Estadio José Rico Pérez on Wednesday evening.

The former Mallorca midfielder took the walk of shame in the 57th minute for deliberately stopping the ball with his hand in the penalty area.

To add to Uche’s misery, Jose Manuel Lopez Gaspar tucked away the resulting spot-kick to give Hércules a two-goal cushion.

The Enugu Rangers and Ebonyi Angels product spent five years at Mallorca before ending his association with the club by penning a deal with UD Cornella in the summer of 2015.

The 25-year-old made 29 starts in the Segunda B in his debut season for the Catalonia based team, received 12 yellow cards in those games and was shown the red card two times .