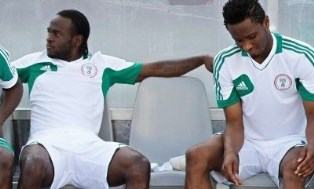 Nigeria international Victor Moses is set to return to the Chelsea squad for their Premier League clash with Leicester City on Saturday afternoon, allnigeriasoccer.com understands.

The winger has resumed  full training after a hamstring complaint kept him out of the World Cup qualifying fixture against Zambia last weekend.

The news will be sweet music to the ears of Super Eagles coach Gernot Rohr, who has assured that the former Crystal Palace and Wigan star remains in his plans for the upcoming meeting with Algeria in Uyo.

In the same vein, Watford number ten Isaac Success and Mainz central defender Leon Balogun have worked their way back to full fitness and are available for selection for their respective teams this weekend.

Coach Gernot Rohr is expected to announce his roster for the World Cup qualifier against Algeria before the next two weeks.