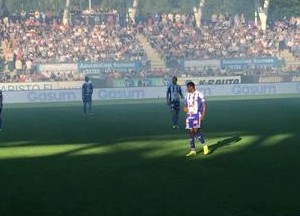 Former Nigeria international Taye Taiwo has fully recovered from the ankle injury he sustained in the Cup final against SJK on September 24.

The HJK Helsinki defender has been named in the starting XI for the Veikkausliiga clash against Mariehamn on Friday, a game which corresponds to the 31st round of matches in the league.

AC Milan loanee Nnamdi Oduamadi also started at the Sonera Stadium (Helsinki) while a third Nigerian player, midfielder Vincent Onovo, is on the bench for HJK.

Taiwo, who extended his contract with HJK at the end of last season, had scored six goals from eighteen matches in the top-flight prior to the meeting with league leaders Mariehamn.

The 31-year-old has represented clubs in France, Italy, England, Turkey and Ukraine.