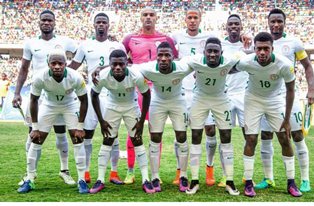 Super Eagles rising star Alex Iwobi is pleased to be compared to his uncle Austin Okocha and retired Netherlands international Edgar Davids by Arsenal teammate Mesut Ozil, adding that it will boost his confidence.

The attacking midfielder broke into the Gunners first team and the Nigeria setup last season, and his progress has not stalled since he earned that promotion, with three assists to his name from five Premier League games this term.

“When I saw [his comments comparing me to Okocha and Edgar Davids] I was like, ‘Wow is he serious?’ because he never really says that much to me,” Iwobi told arsenal.com

“He just gives me advice and help, but it’s such a confidence boost for such a great player to say that about me.”

Iwobi has insisted that he will not rest on his laurels, and vowed to put in the maximum effort possible because he is still learning his craft.

The 20-year-old said to the Gunners official website : “I’m never really happy or satisfied with my performances. I always want to improve and I think that’s probably got me to where I am.

“I’m still learning the game and want to be doing than what I am at the moment, so I’ll keep putting 100 per cent into whatever I do.”