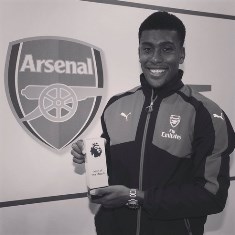 Catch up on the performances of players of Nigerian descent on game week eight in the English Premier League on Saturday, October 15.

The outstanding young talent Alex Iwobi continues to get a run in the Arsenal side, starting and playing for 68 minutes in their hard fought 3-2 win over Swansea City at the Emirates.

The most entertaining moment of the game came from the Nigerian attacking midfielder when he dribbled past the Swansea defenders. England U21 international Chuba Akpom did not make Arsenal’s 18-man squad.

Over to the Vitality Stadium, Bournemouth recorded their biggest win in the Premier League era, thrashing Moses Odubajo’s Hull City 6-1, with Jordon Ibe lasting 62 minutes on the pitch for the home team.

Kelechi Iheanacho was preferred ahead of Sergio Aguero in the starting line-up in Manchester City’s 1-1 draw with Everton at the Etihad Stadium.

Whilst the Super Eagles star made way for the Argentine ten minutes out of intermission, Tosin Adarabioyo didn’t make the Citizens squad and Ross Barkley was on the bench for the Toffees.

Victor Anichebe appeared off the bench in the 81st minute of Sunderland’s 2-0 loss at Stoke City.

Sweden U21 international Joel Asoro was a non-playing substitute and the talented striker Josh Maja was not in the squad.

England star Dele Alli rescued a point for Tottenham Hotspur in their 1-1 draw with West Brom at The Hawthorns, scoring in the 89th minute.

In the early kickoff, Chelsea registered a routine 3-0 win over Ahmed Musa’s Leicester City, with Victor Moses closing scoring in the 80th minute at Stamford Bridge, two minutes before he was replaced by Ola Aina.