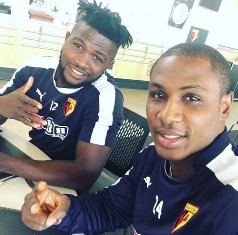 According to information gathered by allnigeriasoccer.com, ex-Nigeria U20 international Isaac Success is unlikely to make his first start in the Premier League in Watford’s tie with Middlesbrough on Sunday afternoon.

It is confirmed that the number ten has been named in the Hornets 18-man squad for today’s fixture at the Riverside Stadium, but will start on the bench, barring any last-minute developments.

The 20-year-old Success made his competitive debut for Watford off the bench in their loss to Arsenal on August 27, and was given a run-out against West Ham, Manchester United, Burnley and Bournemouth.

He has resumed full training with the Vicarage Road outfit after pulling out of the Nigeria squad for the World Cup qualifier with Zambia, citing fitness issues.