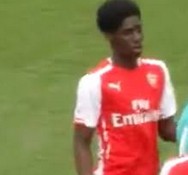 Promising Nigerian teenager Tobi Omole has revealed that he started off his career as a box-to-box midfielder but was converted into a central defender upon his arrival at Arsenal.

The Thamesmead product has no regrets switching roles, and has highlighted the qualities of a central defender, including being aggressive in order to stop the physical strikers in a team.

“Although I was a box-box-box midfielder when I was spotted by Arsenal playing for Thamesmead, I’ve mainly played as a centre back since joining the Gunners, ” Omole told Arsenal Matchday Programme

“In fact I’ve been taught to play in various positions, in particular as a full-back and of course in midfield. I enjoy playing as center back because I think of it as the “brain of the team”...

“Looking around and studying top defender, the aggressive ones are the best in my opinion, and you need that, especially when you come across physical and strong strikers like Diego Costa. ”

Aged 16, Omole lives in the same house in Cockfosters with Nigerian defender Joseph Olowu, and is presently studying for his A Level in Economics.