Nigerian Trio Missing As Liverpool Are Frustrated By Manchester United 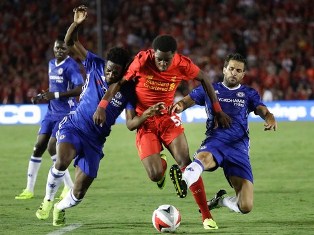 English-born Nigerian trio Ovie Ejaria, Sheyi Ojo and Tiago Ilori were missing from the Liverpool squad that drew goalless with Manchester United at Anfield in the Premier League on Monday night.

The first half at L4 0TH had few chances, with both teams preventing each other from scoring, and it took a long time for the Reds to get into the game with a passing accuracy of 59.8 percent in the first twenty minutes.

The Red Devils were relatively organized as Liverpool were frustrated in midfield, and they played for a draw whilst hoping they could nick a win which didn’t happen.

The home team had two excellent chances to claim all three points. De Gea first saved a shot from Emre Can before the Spanish netminder thwarted an effort from Coutinho from 30 yards.

Ejaria, 18, was handed his debut by Jurgen Klopp against Derby County on September 20 in the League Cup, but has not made the squad for competitive fixtures since then, while Ilori and Ojo have not played for the first team this season.

After eight rounds, Liverpool sit fourth on the table, with two points separating them from Manchester City and Arsenal, while Manchester United are seventh with 14 points accumulated.