Promising West Ham Defender Akinola Has An Eye For Goals 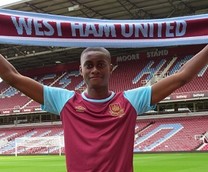 Promising West Ham defender Tunji Akinola has added goalscoring to his game, with two goals to his name for West Ham U18s in the U18 Premier League in the ongoing season.

The 17-year-old helped the young Hammers secure wins at Norwich City and Reading, hitting target in the 27th and 58th minute in both fixtures, to take his tally to two goals from three matches.

Akinola has been promoted to the Development Squad, and has played four games to date in the 2016-2017 campaign.

Last season, the highly-rated stopper was on target against Tottenham Hotspur, Leicester City and Fulham.

Born November 21, 1998, Tunji Akinola has yet to make his professional debut for the Hammers but that could change in the coming years if not months.