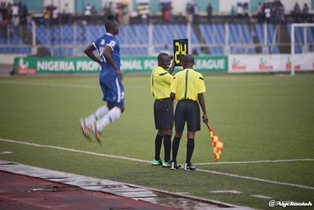 A handful of reports suggest that the energetic defender was hit by a stray bullet while others say he was shot dead by security men on operation in his home town, Okaki, Bayelsa State.

Honourable Iyaye has now urged the 3SC family to show strength following the sad turn of events while urging security operatives to fish out the killers of Izu.

“The death of this vibrant young man, cut short at the prime of his career,represents yet another dark chapter in the history of Nigerian football.

“I have since sent my personal condolences to 3SC and on behalf of the sport fraternity in Rivers State, I also urge the Izu family to be strong in this period of great sadness.

“I am also using this medium to call on security operatives to embark on exhaustive investigations with a view of bringing the killers of the late Izu to book,” he said.

The late player joined 3SC in the 2013/14 season from Bayelsa United and had just completed his third season at the Oluyole Warriors.