Six Nigerians Figure; Reading Goalscoring Defender Odimayo On The Mark In Win Vs Arsenal In UPL 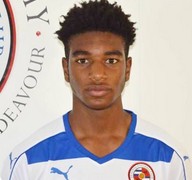 Six players of Nigerian descent were on parade at Hogwood Park Training Ground (Finchampstead, Berkshire) as Arsenal suffered their biggest defeat of the season, losing 5-1 to Reading in the U18 Premier League on Saturday.

Akinwale Odimayo skippered the Royals U18s and he was joined in his side’s starting XI by defender Ademola Shokunbi; Tolaji Bola and Joseph Olowu started for the Gunners while teammates Tobi Omole and Joseph Olayinka came off the bench in the second half.

Reading were 4-1 up before Odimayo added more gloss to the scoreline with his third goal of the season in the 89th minute.

The tall central defender opened his account for the season versus Tottenham Hotspur on September 10, before adding to his tally in the 2-0 win over Leicester City a week later.

Reading and Arsenal have garnered the same number of points, 17, after nine rounds in the UPL, but the Gunners are second on the table due to their superior goal difference.