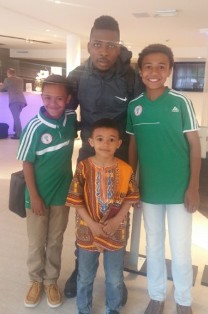 Allnigeriasoccer.com has been informed that Arsenal are sounding out the possibility of signing American-born Nigerian whizkid Lateef Omidiji Jr from FC Dordrecht after he attains the age of majority.

A representative of the teenage striker has opened a line of communication with manager Arsene Wenger and the Gunners higher-ups have made his signing a priority.

The London club are impressed with Omidiji’s on the field intelligence and awareness - he has the quick thinking of a professional player and has such an eye for goal that many have likened him to Luis Suarez.

It is understood that Arsenal are lagging behind in the race to secure his signature, with Sparta Rotterdam, PSV, Ajax and Feyenoord also in the hunt for the young attacker.

The big French clubs, Barcelona and Real Madrid are monitoring Lateef Omidiji’s progress in the Netherlands, with a view to a transfer in future.