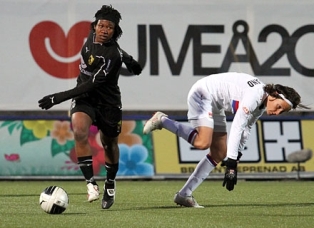 Three Swedish-based Nigerian stars, who play in the top league Damallsvenskan, are set to represent the Super Falcons at the 2016 Africa Women Cup of Nations in Cameroon next month.

They include Faith Ikidi (Piteå), Rita Chikwelu (Umeå IK) and Ngozi Sonia Okobi (Vittsjo), and the trio expressed their happiness at being called to the national team.

Rita Chikwelu was out in the international wilderness until she was invited to the Super Falcons squad that tackled Senegal in April.

“I’m very happy to have the opportunity to play with the Super Falcons again. It is a great honor for me. For various reasons I have not had the chance to play in the National Team since 2012 in the Nations Cup, except for two qualifying matches against Senegal in April.

“We will have a good team traveling to Cameroon, I know our coaches will prepare the team and the players in the best way for the tournament.

“We professionals abroad have been playing a long season and we are all in great shape,” Chikwelu told allnigeriasoccer.com.

She added : “Faith Ikidi has as usual had a very good season in Piteå as a central defender, Okobi has trained hard and played many good matches.

“I believe in our team and it’s a good mix of players from Nigeria and professionals. ”

All the players are important for their teams and Nigerians should all be proud of them.

Rita Chikwelu had again a very good season. Her team Umea has been hit by injuries but Rita has carried the team on her shoulders.  She has been one of the best midfielders in Damallsvenskan this year.

Faith Ikidi was voted Defensive Player of the Year 2015 in Sweden, a prize that she could have had even several times before. She has caught the eyes of many in her games and is a role model for many Swedish footballers.

Okobi has worked hard in the midfield in a new tough league. Her physical status has never been better and her great technical skills are improving.