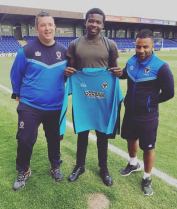 Allnigeriasoccer.com understands that former Golden Eaglets trainee Edward Ogbebor-Onaiwu is in line to make his competitive debut for the U18 team of AFC Wimbledon in Tuesday’s FA Youth Cup round one clash against North Greenford United.

The 16-year-old netminder, who was born in the United Kingdom, has been included in the Dons provisional roster for the game that will take place at Kingsmeadow, the home ground of the first team, and might start on the bench.

Ogbebor-Onaiwu joined AFC Wimbledon in October and has become an important member of the U16 squad.

Ahead of the fixture against North Greenford United, the shot-stopper has trained with the U18s squad and has been involved in friendly matches.

The likes of Paul Pogba (Manchester United), Jack Wilshere (Arsenal) and Jeffrey Bruma (Chelsea) have won the FA Youth Cup with their respective teams in the past.