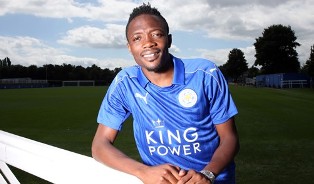 Leicester City record signing Islam Slimani is expected to lead the Algerian national team frontline when they trade tackles with Nigeria on November 12 in Uyo.

The striker was left out of the Foxes team that forced FC Copenhagen to a goalless draw last night only as a precaution, with manager Claudio Ranieri confirming that he was rested for the game at Parken.

A groin injury had initially ruled him out of Leicester City’s 1-1 draw at Tottenham Hotspur last weekend, but matching press reports in Algeria and England suggest that he would be back in the squad for the home game with West Brom.

The 28-year-old Islam Slimani provided the assist for El Arbi Hillel Soudani’s goal against Cameroon back in October.

His teammates Riyad Mahrez and Ahmed Musa have been named in the latest Algeria and Nigeria squad respectively.