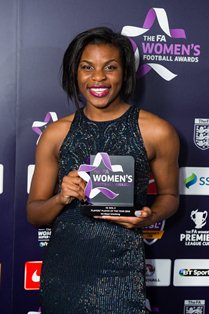 Nigeria international striker Umotong won the FAWSL 2 Players’ Player of the Year award plus the Golden Boot after netting 13 goals in 17 appearances for Oxford United Women.

Chelsea star Eniola Aluko won the Golden Boot for the FAWSL courtesy of her 9 goals from 16 games over the course of the 2016 season.

The Three Lionesses attacker was not physically present to receive the award because she traveled to Uganda to give a speech.

Asisat Oshoala (Arsenal), Adekite Fatuga-Dada (Watford Ladies), Rinsola Babajide (Millwall Lionesses) are the other players of Nigerian descent who represent clubs in the WSL 1 and WSL 2.