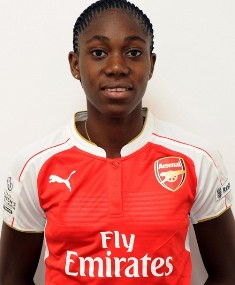 After Arsenal striker Asisat Oshoala netted four goals at the 2016 Africa Women Cup of Nations clash against Mali on Sunday, she took her tally in the competition to eight.

In 2014, the former Liverpool star finished the AWCON with four goals to her name, one less than Golden Boot winner Desire Oparanozie of Guingamp.

On a personal level, Peppe is Nigeria’s most successful player at the Africa Women Cup of Nation, having won the Golden Boot four times and the Player of the Tournament in 2004.

The 40-year-old was among eight players that found the back of the net for the Super Falcons in Namibia.