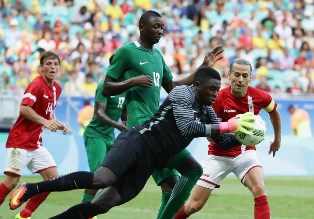 Nigeria U23 international Sadiq Umar is set to undergo surgery on his left ankle.

An examination on the 19-year-old striker by Bologna medical staff showed a small detachment of the medial malleolus, caused by a blunt-sprain suffered during the last training conducted in Trigoria.

Umar, who is on loan from Roma, is scheduled for surgery early next week after a joint consultation from both club medical staff and he is expected to be out of action for 30 days.

It would be recalled Sadiq Umar scored four goals for Nigeria during the Rio Olympics in Brazil.

This season, he has appeared five times for Roma in the Italian top-flight.