...the complete Nigerian football portal
Subscribe
Okocha Speaks On 1993 Goal Of The Season : Nothing Personal Against Kahn
Published: December 01, 2016 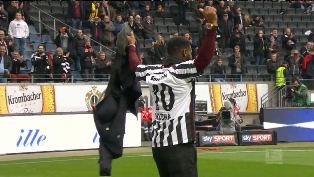 Retired Nigeria international Jay-Jay Okocha has commented on his goal against Karlsruhe in the Bundesliga back in the 1992-1993 season which was voted Goal of the Season by many publications.

With the scoreboard reading 2-1, Okocha, who was introduced in the 66th minute, received a pass from Uwe Bein and saw himself surrounded by the whole Karlsruhe defense but refused to be discouraged.

He dribbled the defenders and goalkeeping legend Oliver Kahn , changed direction and was unpredictable in all his moves, before slotting the ball past Kahn.

“It’s great to be back in my 2nd home, my career began here. The goal against @OliverKahn was nothing personal, ” Okocha said.

Okocha scored that memorable goal in the 87th minute of the contest at the Commerzbank Arena on August 31, 1993.