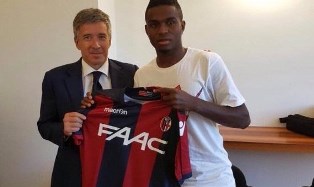 Nigeria U20 international Orji Okonkwo is in line to make his Coppa Italia debut on Thursday night when Bologna face off against Verona at Stadio Renato Dall’Ara in the fourth round.

The former Golden Eaglets star has been listed among the forwards by coach Roberto Donadoni alongside Destro, Di Francesco, Floccari, Krejci and Mounier.

Okonkwo has been promoted to the first team of Bologna after he initially played for the U19 squad in the Primavera upon his arrival in Italy from Football College Abuja.

The youngster was in action against Palermo and Atalanta in the Serie A, coming off the bench in both fixtures and logging 19 minutes.

His teammate Umar Sadiq is currently out injured after successfully undergoing ankle surgery.