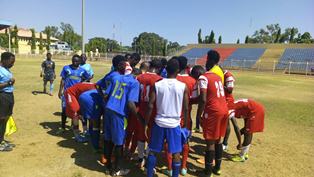 Best ‘Messi’ Deemua made a huge statement as one of the stars to watch with a superb all round display to inspire Rivers United to their second successive win at the 2016 Shehu Dikko Annual Football tournament in Kaduna.

The midfielder was the conductor of the orchestra at the Ranchers Bees Stadium and was unfortunate not to cap his virtuoso display with a goal as United overpowered Albatex FC 1-0 on Friday.

His mazy run on the stroke of half time which left three Albatex defenders for ended with Teju Ojo fouling him cynically and giving away a penalty in the process.

Lukman Mohammed made no mistakes from 11 metres as United stormed to their second win in as many games.

The win means the ‘Pride of Rivers’ stay top of the standings with six points, five points more than closest challengers, Wikki Tourists who could only draw 0-0 with KJ United in their opening game on Friday.