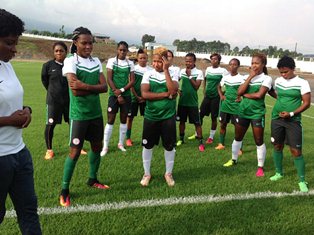 Allnigeriasoccer.com understands that the leadership of the Nigeria Football Federation held showdown talks with players and officials of the Super Falcons on Tuesday, December 6 at Agura Hotel, Area 10 Abuja.

Upon their return from Cameroon where they successfully defended the African Women Cup of Nations, players refused to be decamped unless they are paid their outstanding entitlements.

During the meeting, the President of the Nigeria Football Federation, Amaju Pinnick insulted the players, made it crystal clear that the Federation have no money to pay the players, and told them they won’t get paid even if they remain at the hotel until January.

Pinnick only offered the players their traveling expenses but the players held their ground not to vacate the hotel.

The NFF supremo later sent General Secretary, Dr. Mohammed Sanusi and Head of Women Football, Ruth David, to appeal to the players but they remained adamant.

All the players that defended the colours of Nigeria at the AWCON are still with the squad except Guingamp striker Desire Oparanozie who left the team on Monday and will return to France today to join her club.