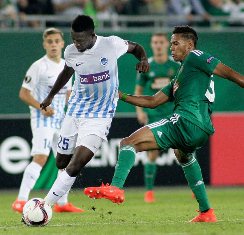 English Premier League champs Leicester City have leapfrogged Manchester United in the race for Wilfred Ndidi, according to the defensive midfielder’s camp.

The Red Devils were hoping to beat Leicester City to the signature of the Nigeria international but have lost out in the race, with the Foxes all but agreeing a deal with Racing Genk.

“Manchester United thought that they would sign Ndidi because of their name and the reputation of Jose Mourinho but they haven’t been able to pull off the deal, ” Ndidi’s bonafide representative told allnigeriasoccer.com.

“Ranieri still has a reputation and that convinced Ndidi, it is all but confirmed that he is heading to Leicester City.”

Reports claim that Ndidi has already passed a medical examination with the Foxes, paving the way for him to complete his move to LE2 7FL in the next three weeks or so.

Asked to confirm that report, his representative answered : “He has not done any medical with Leicester City, the paperwork has not been completed”.

Ndidi, 19, has been included in Racing Genk starting XI for their final Europa League fixture against Sassuolo on Friday afternoon.