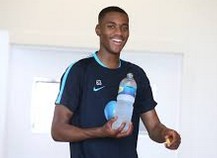 Manchester City defender Tosin Adarabioyo has insisted that he doesn’t pattern his game after any player, and admitted that he’s still learning his craft from his experienced teammates.

The English-born Nigerian youngster, who has been with City since the age of five, played the full game against Celtic in the Champions League on Tuesday.

“I wouldn’t say I model myself on one player. I try to learn ­everything I can from every player and put it into my own game, ” Adarabioyo said, according to the Mirror.

“When we are training, if I do something wrong, one of the lads will pull me to one side and try to fix it – even if they do

“They’re a great set of people to be alongside. I am thankful for that.”

Adarabioyo was on the bench as City lose 4-2 to Leicester City in the Premier League on Saturday.