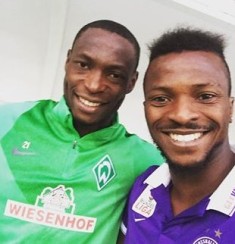 Austria Vienna striker Kayode Olanrewaju said playing among the best in the Europa League gave him an extra motivation in doing well individually.

The former Nigeria U20 star, who is one of the most in-form Nigerian forwards in Europe at the moment, disclosed that he was sad after his team exited the competition.

Olanrewaju, however, spoke of his intent in helping his side qualify for the tournament next season as they currently trail league leaders Rheindorf Altach with five points in the Austrian Bundesliga.

“I am so sad losing out of the qualification for the round of 32 in the Europa League, ” said Kayode to allnigeriasoccer.com.

“Playing in the Europa League among top clubs gave me extra motivation in wanting to do well.

“I want to help this team return to the competition next season.”

The left-footed striker has scored 14 goals (6 assists) in 31 appearances in all competitions so far this season.