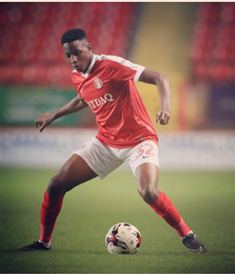 Catch up on the performances of players of Nigerian descent in the English Premier League and FA Cup on Tuesday night.

Arsenal ended their 14-game unbeaten run after suffering a 2-1 loss at the hands of Everton at Goodison Park. Nigeria international Alex Iwobi was introduced in the 71st minute, teammate Chuba Akpom wasn’t available for selection as a result of injury.

England midfielder Ross Barkley impressed in midfield for the Toffees and put in a full shift.

Champions Leicester City continued their miserable away form after they were beaten 1-0 at AFC Bournemouth. Ahmed Musa came off the bench for the visitors on 74 minutes, Jordon Ibe was a non-playing sub for the second game in a row.

In another second round replay, former Nigeria U23 trainee Ayo Obileye helped Eastleigh secure a 2-0 win at

Halifax Town, playing the last 13 minutes at The Shay Stadium.

Joe Aribo and Ademola Lookman started for Charlton Athletic against MK Dons at Stadium mk (Milton Keynes) . Striker Nicky Ajose joined the duo on the pitch after 73 minutes while the fourth Nigerian in the ranks of the Addicks, Josh Umerah remained on the bench.

Ex-Arsenal starlet Chuks Aneke started for MK Dons and was replaced after the hour mark. Milton Keynes Dons were leading 3-1 in the second half of extra-time.