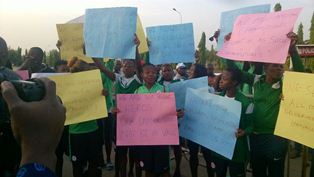 Allnigeriasoccer.com understands that Nigeria’s Women’s National Team, the Super Falcons, took their protests over unpaid bonuses and allowances to the National Assembly on Wednesday morning.

The 16 players, who departed the Agura Hotel in Abuja early this morning, started their protests at the National Assembly at around 0730 hours, and have no plans to leave the Complex until they get the attention of Nigeria president, Muhammadu Buhari, who is due at the Assembly later today to address the Senate and House of Representatives.

The African Women Cup of Nations winners have blocked the entrance to the National Assembly and honourable members are following the back door to enter the building.

Without mincing words, it appears Asisat Oshoala and recuperating defender Onome Ebi backed out of the protests, and the Arsenal striker’s flimsy argument is that she is in Lagos for her Emzor Xmas programme which she does every year.

The AWCON Golden Boot winner appeared on local television on Tuesday and she didn’t condemn or support the Nigeria Football Federation when she was given the opportunity to do so.

This website understands that the Senate President, Bukola Saraki, and the Speaker of the House plan to address the players in the coming hours.

However, the players have sworn to storm Aso Villa if they don’t get a favourable response from the Senate and House of Reps.