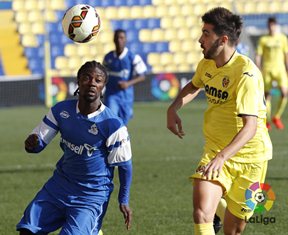 Guy Kuemian headed home the decisive goal as Rivers United beat Villarreal B 1-0 in a tune up game at Ciudad Deportiva Valenciana on Wednesday.

The Ivoirian marksman displayed his entire predatory skills as he sneaked onto the far post to head home Bernard Ovoke’s corner kick past the Villarreal goal keeper, Nico Campuzano in the 24th minute.

Kuemian had to hobble off with a quarter hour still to play with a suspected muscular injury and his replacement, Elvis Wike should have doubled the Pride of Rivers’ advantage in stoppage time.

He however dragged his effort wide from close range after he was played in by Asamoah Godbless.

United had plenty of chances earlier in the game and could have easily added to their tally but Emeka Ogbugh had two efforts which hit the back of the net chalked off for different reasons.

The Spaniards also had their moments, particularly in the 88th minute when Leandro’s strike flew inches wide off Sunday Rotimi’s left hand post.