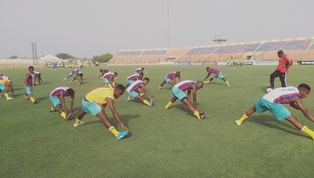 The Technical Adviser of Nigeria Professional League (NPFL) side, Remo Stars has expressed delight with his lads after defeating host state, Gombe United in the 3rd place match of the Nigeria National League (NNL) Super4 tournament.

He appreciated the fact that both teams played the same way in the game, putting pressure on each other and eventually giving the neutrals a good game.

“One thing I am quite impressed of is that we both played the same way and we put pressure on each other but as a boss, his side put more pressure on my team ten minutes to go and at the end of the game, we won by penalties.”

Ugbade expressed how lucky he was to defeat Manu Garba tutored boys in the competition. “I was lucky at least to be able to beat my boss. ” He concluded.