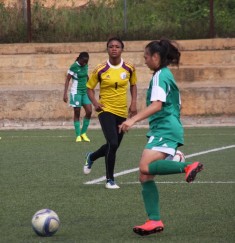 Allnigeriasoccer.com can exclusively report that KAA Gent are on the verge of announcing the capture of Falconets striker Sophia Omidiji from Dutch club FC Eindhoven.

Omidiji and her entourage have arrived in Belgium to finalise her move to the Belgian Super League club.

And this will put an end to speculation surrounding her future, with earlier reports linking her with possible moves to PSV Eindhoven and a couple of Women’s Super League clubs in England.

Sophia has been described as a false number nine, who tracks back from the defensive line to receive the ball, and is also comfortable playing in midfield and as a winger.

The 19-year-old is a product of Las Vegas Premier Sports Academy and Sierra Vista High School.