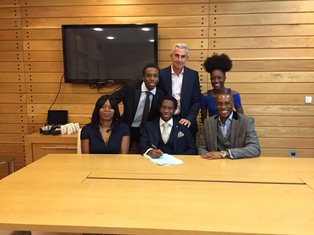 Nigerian wonderkid Tariq Uwakwe made his competitive debut for Chelsea U23s in their narrow 1-0 loss to Dinamo Zagreb in the Premier League International Cup on Friday evening.

The central midfielder’s only appearance for the Development squad was in a scrimmage against FC Nuremberg earlier this month.

Against the team from Croatia, Uwakwe was handed his debut by manager Adi Viveash when he introduced him in the 72nd minute.

This season, he has added goalscoring to his game, netting three times in the U18 Premier League and also hit target on his debut in the FA Youth Cup versus Cardiff City.

Chelsea rewarded Tariq Uwakwe with a professional contract in November, which will see him remain at Stamford Bridge until the end of the 2018-2019 season.