...the complete Nigerian football portal
Subscribe
Iheanacho, Iwobi Have The Most Assists In Premier League By U23 Players
Published: December 18, 2016 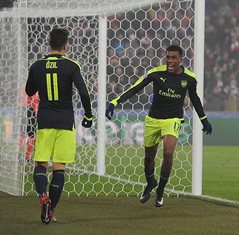 Ahead of the eagerly anticipated Premier League clash between Manchester City and Arsenal at the Etihad Stadium on Sunday evening, Super Eagles rising stars Kelechi Iheanacho and Alex Iwobi have provided the most assists by a player yet to celebrate his 23rd birthday.

Earlier in the season, Iwobi found it difficult scoring goals but was very important to Arsenal nonetheless, claiming assists in games against Liverpool and Hull City (2).

Iheanacho has helped Man City with three assists in matches against Stoke City, Manchester United and Bournemouth, all of them in his first four games of the season.

Most Assists By U23 Players